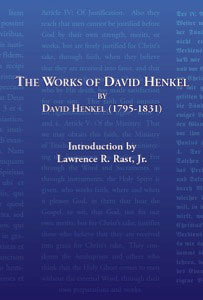 The Works of David Henkel

A "Lutheran voice crying in the wilderness of early American Protestantism (words of the late Louis Smith, 2001)" speaks to a new generation of Lutherans in The Works of David Henkel. An engaging 24-page introduction by Dr. Lawrence Rast invites the reader into a nearly 700-page collection of Henkel's vibrant writings and related source documents, reflecting the intense, tumultuous, and very public ministry (1817–1831) of an early confessional American Lutheran. Henkel contends with foes within and without the Lutheran church over issues of the Trinity, Christology, Justification, the Sacraments, confessional subscription, church authority and polity. Predating the more heralded movements of the 1840s, Henkel and his Tennessee Synod often spoke as a lone confessional voice in America—a voice that rings true and with a uniquely American tone also in our time.