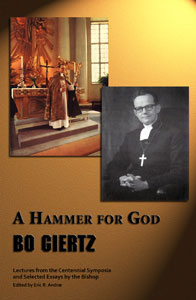 A Hammer for God: Bo Giertz

Available from the Concordia Theological Seminary Bookstore at (260) 452-2160 or from our online store.

This “Giertz reader” is the most comprehensive volume ever published on Bo Giertz (1905-1998) in the world's language. The American Giertz revolution which began shortly before his centennial, continues with an increasing number of works by and about Giertz being made available in English.

Indeed, had he written and worked primarily in English, and not in Swedish, the bishop would have long ago taken his rightful place alongside such 20th century luminaries as C.S. Lewis and Dietrich Bonhoeffer. Through essays by such scholars as Robert Kolb, Gene Veith, Hans Andræ, Eric Andræ, Bror Erickson, Alex Klages, Charles Henrickson, Naomichi Masaki, and John Pless, as well as original translations from Giertz’s work, this volume is the leading U.S. contribution in giving his life and theology the hearing it demands. This book is an indispensable aid to those who wish to dig deeper into his confession and understand the faith of the author of the acclaimed and beloved The Hammer of God, which this year and with this anthology celebrates the 50th anniversary of the novel’s first English edition.

Bo Giertz (1905-1998) served as a rural parish pastor, occasional preacher to the royal court, bishop of the Gothenburg diocese in the Church of Sweden, Vice President of the Lutheran World Federation, and prolific Christian author on every subject imaginable. His books include The Hammer of God, Preaching from the Whole Bible, To Live with Christ, and Christ’s Church.

Eric R. Andræ, a native of Sweden, is the general editor of this volume, as well as the founder and president of the International Giertz Society (English Language Section). Having spent a semester as a research scholar at Uppsala University, he received his S.T.M. [Lic.] from Concordia Seminary-St. Louis in 2003 with his thesis on Giertz’s use of the Order of Grace. He has translated many articles by Giertz and is now working on his Kyrkofromhet [Church Piety].