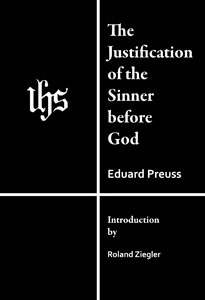 The Justification of the Sinner before God

Available from the Concordia Theological Seminary Bookstore at (260) 452-2160 or from our online store.

I, a poor sinful man, confess to Almighty God, my Creator and Savior, that I have sinned not only in thought, word, and deed, but also have been conceived and born in sin, so that my whole nature and all my being is guilty and is condemned before his righteousness.

Why does our Divine Service begin thus? Because no one who has not recognized his sin can receive grace, and certainly not even understand justification by faith. For the heart of man is by nature either Pharasaical or drowned in lust for sin. Either it depends upon his good works, and on that account finds the imputation of a foreign righteousness useless, or it cheers, “Let us eat and drink, for tomorrow we die,” and assures itself that it needs neither its own nor a foreign righteousness. To preach justification by faith to such people is known as casting pearls before the swine. He, on the other hand, who lies in water is glad when a foreign (alien) hand is lowered from a foreign (alien) ship to hoist him onto dry land. He who recognizes the walls around himself as prison walls thanks God when He breaks open its door and says to him, “You are free!”

Preuss’ treatise shows his great exegetical knowledge and his wide reading in the Lutheran fathers. This extends not only to the classics like Chemnitz and Gerhard, but also to minor figures like Höpfner. He draws prodigiously from the age of Lutheran orthodoxy, but is also conversant with the discussion of his time, including the Roman neo-scholastic tradition of Perrone. He is a master dialectician, but his book is more than an academic treatment of the subject. It is written passionately, sometimes crossing the boundary into the sermonic, and makes ample use of the hymnody of the church. As such, it combines the scholarly and the edifying in a paradigmatic way. C.F.W. Walther called it the best book written on justification in the 19th century. As such, it is well worth reading today, and this edition makes it accessible to a new generation.